From the Editor-in-Chief’s desk: Your October 26 briefing

It’s the start of another work-week and we wish you well wherever you are. Stay well and stay safe.

Here are some stories that made the headlines in The Fiji Times’ edition for Tuesday, October 26.

But before that, just a reminder for you: Remember we are celebrating our 152nd anniversary and you can get into the draw to win cash prizes. We had 10 lucky readers winning in the September draw. For this month, 20 readers will have a chance to win cash. All you have to do is cut out the masthead of The Fiji Times newspaper, write your name, address and a phone contact on it, and place this in a bin provided at a participating store near you. Turn to Page 11 for details. It’s that easy!

Now to the pages!

The People’s Alliance Party leader Sitiveni Rabuka says they have no plans to join other political parties in contesting the next general elections. “We will work alone,” the former prime minister said. He said candidates from other political parties could join them, but they are to adhere to the party policies. FULL REPORT IS ON PAGE 3.

AFTER spending more than 18 months without international visitors, the tourism industry is eagerly waiting the reopening of Fiji’s borders on November 11 and for tourists to return on December 1. After Government’s announcement earlier this month, the industry has been spending the past few months preparing for the day their employees could return to work.

A SQUATTER settlement in Suva is in shock after an alleged stabbing incident that led to the death of a woman in the area over the weekend. Police spokesperson Ana Naisoro confirmed the alleged incident happened at Nanuku settlement in Vatuwaqa. She said a man in his 40s was in police custody for allegedly causing the death of his defacto partner.

LETTERS TO THE EDITOR/LEADER – PAGES 8 AND 9 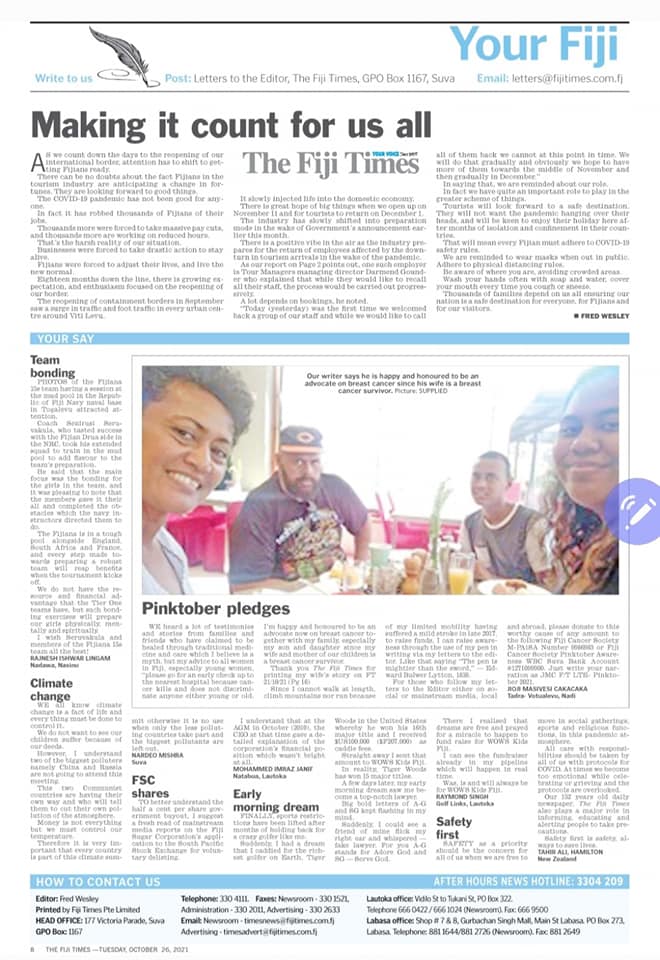 Check out some interesting letters on these pages. The leader is on the reopening of our international border, and the expected impact on the lives of those returning to work.

This section is gaining popularity among readers and comes out every Tuesday. The big one on InsideSTORY is about telecommunication. 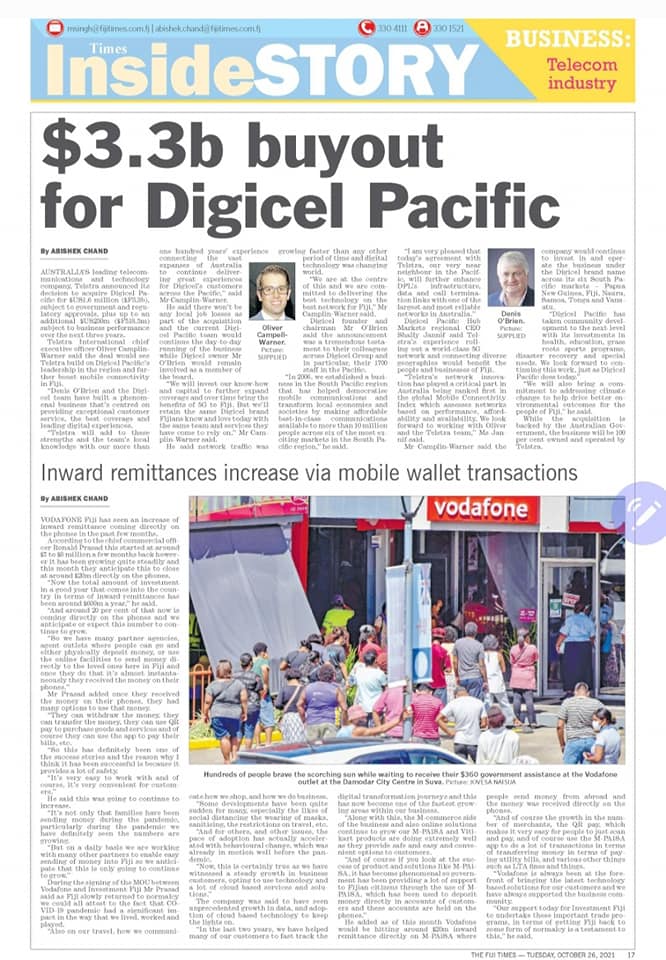 AUSTRALIA’S leading telecommunications and technology company, Telstra announced its decision to acquire Digicel Pacific for $US1.6 million ($F3.3b), subject to government and regulatory approvals, plus up to an additional $US250m ($F518.5m) subject to business performance over the next three years. Telstra International chief executive officer Oliver Camplin-Warner said the deal would see Telstra build on Digicel Pacific’s leadership in the region and further boost mobile connectivity in Fiji.

The big one on the back page is about rugby union. 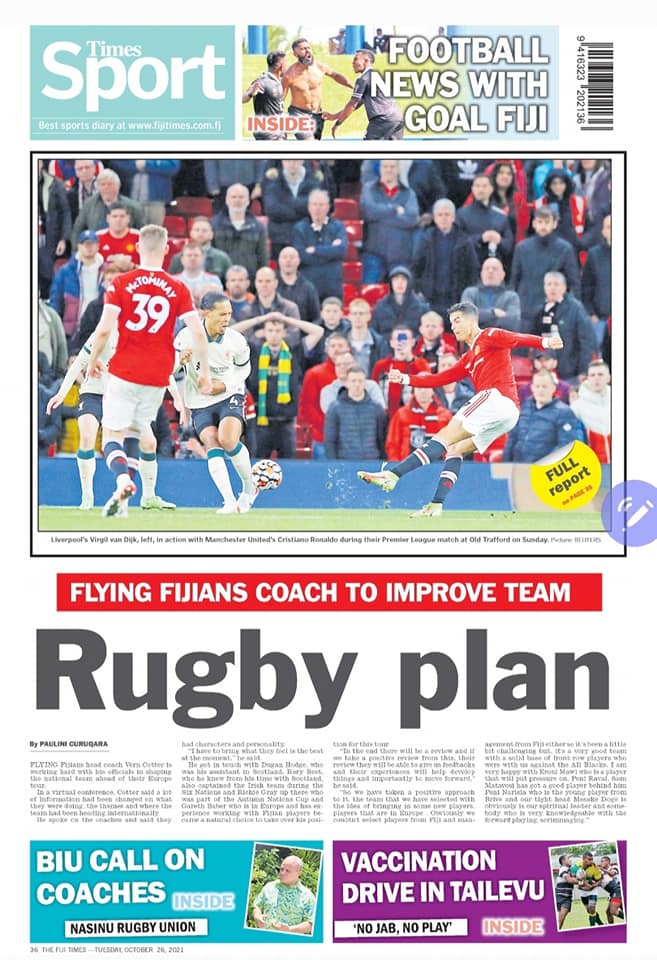 FLYING Fijians head coach Vern Cotter is working hard with his officials in shaping the national team ahead of their Europe tour. In a virtual conference, Cotter said a lot of information had been changed on what they were doing, the themes and where the team had been heading internationally. He spoke on the coaches and said they had characters and personality. “I have to bring what they feel is the best at the moment,” he said. He got in touch with Dugan Hodge, who was his assistant in Scotland, Rory Best, who he knew from his time with Scotland, also captained the Irish team during the Six Nations and Richie Gray up there who was part of the Autumn Nations Cup and Gareth Baber who is in Europe and has experience working with Fijian players became a natural choice to take over his position for this tour.

This section is back following the resumption of the Fiji Football Association’s National League competition. 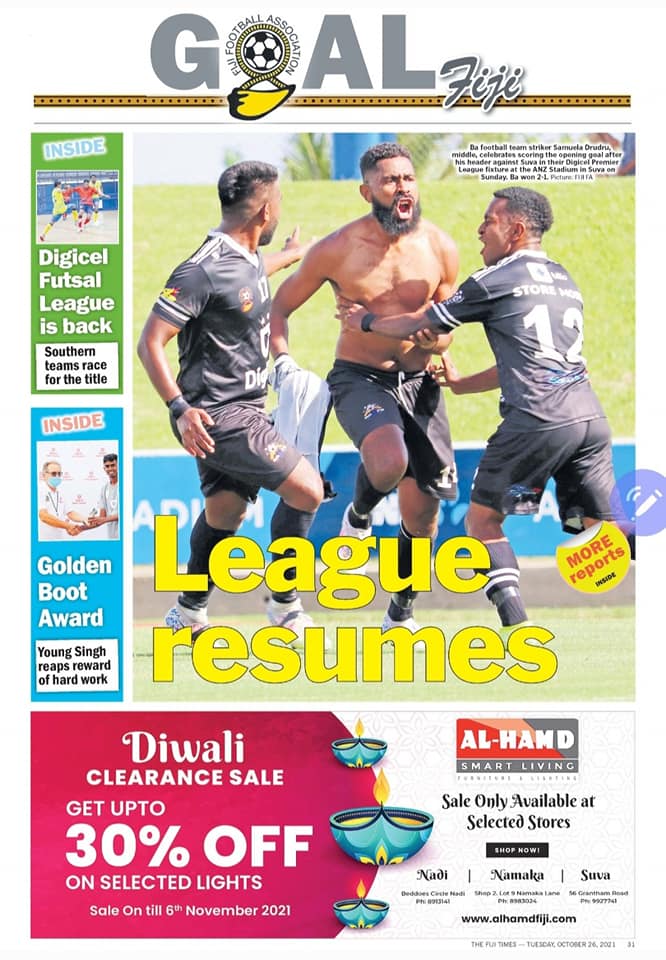 This is a must-read for soccer enthusiasts and keen followers of the game. Turn to the Sports pages for your soccer up-date.