From the Editor-in-Chief’s desk: Your September 18 briefing

It’s the end of another work-week and as we count down the hours to the weekend, we hope you are well wherever you are and staying safe.

Remember you can get into the draw to win cash prizes with The Fiji Times. All you have to do is to cut out a masthead of The Fiji Times, write your name, address and phone contact, and place this in a bin provided around the country at shops that sell the newspaper. It’s easy and you have to be in it to win! Check Page 19 for details.

Here are some reports that made headlines in The Fiji Times’ edition for Saturday, September 18. 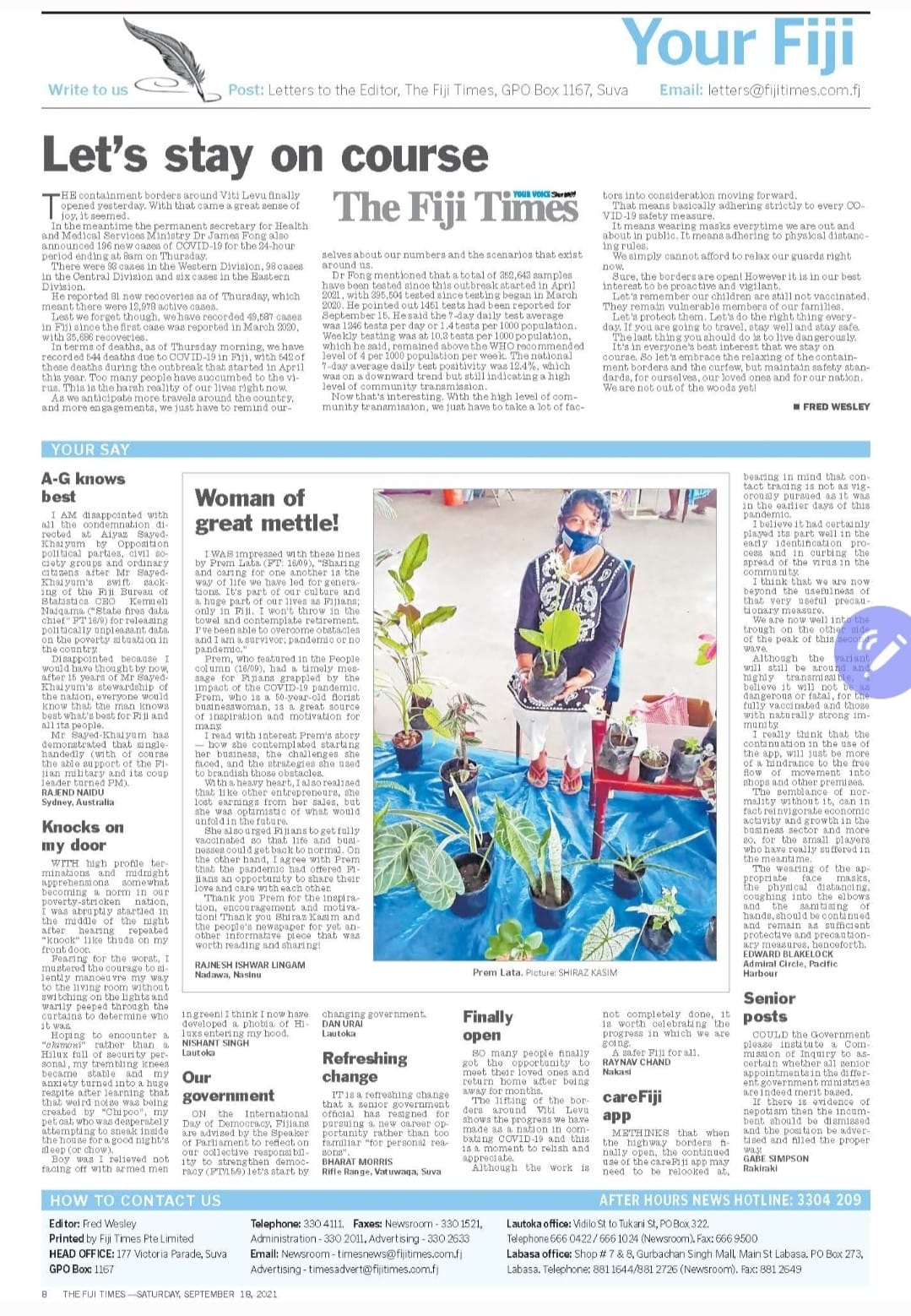 It’s the weekend and there are seven pages of letters to the editor. Feel the pulse of the nation, understand what people are talking about, and read different opinions on issues out there in the public domain. Pages 8,9,20,21,22,23 and 24. 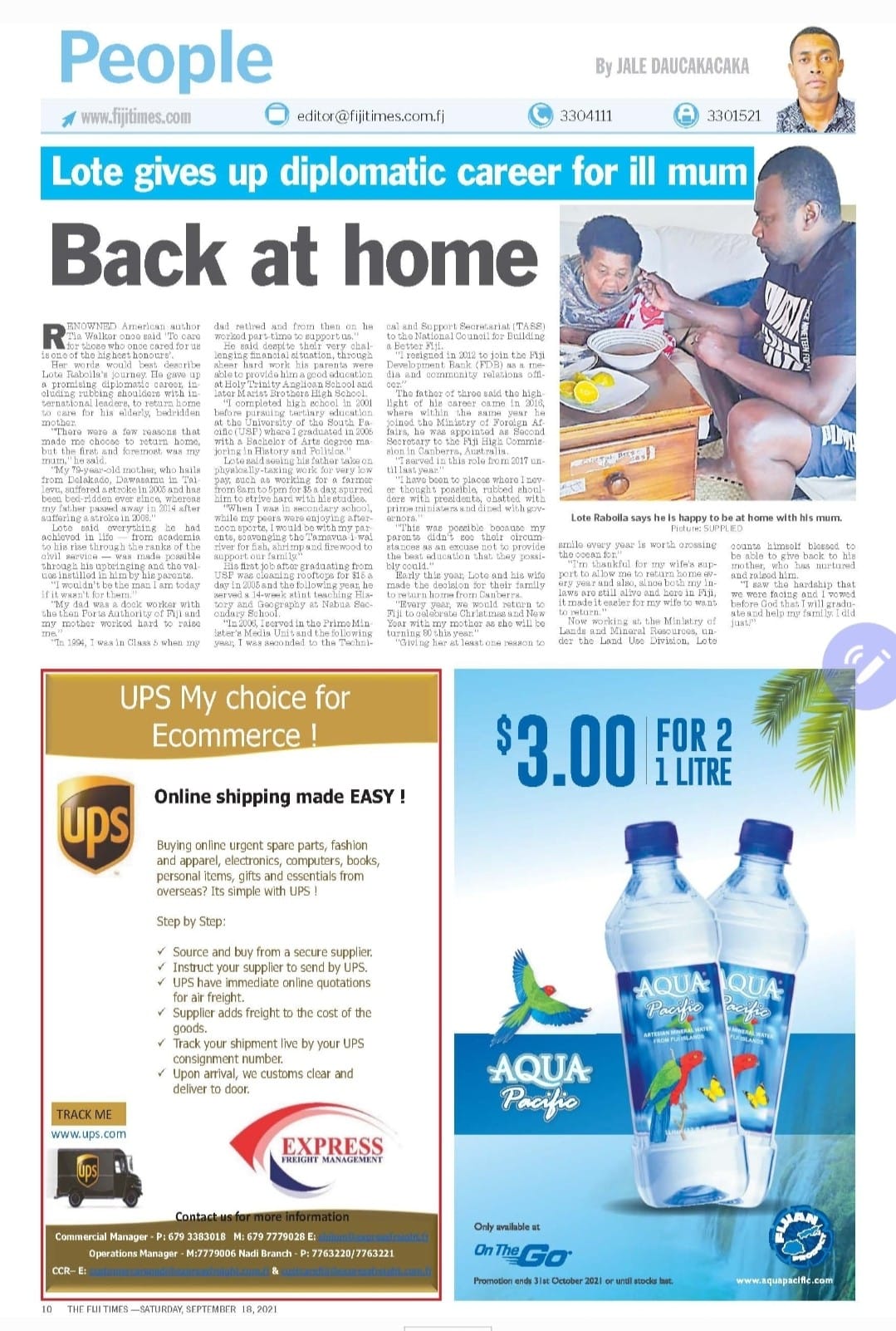 In this popular section, read about: RENOWNED American author Tia Walker once said ‘To care for those who once cared for us is one of the highest honours’. Her words would best describe Lote Raboila’s journey. He gave up a promising diplomatic career, including rubbing shoulders with international leaders, to return home to care for his elderly, bedridden mother.

There are some quality articles for your weekend reading pleasure in this section. It is a very popular section of the newspaper every Saturday.

IN my The Fiji Times article last week, I commended the Fiji Bureau of Statistics for convincing the Government to publish the Household Income and Expenditure Report. I commended the Bainimarama Government for releasing the poverty facts to the public, regardless of their political sensitivity.

THE Government has summarily dismissed Kemueli Naiqama from his position as Government Statistician and head of the Fiji Bureau of Statistics. We are informed that Mr Naiqama had breached the law on statistical surveys and consequently, the terms of his contract of service, by allowing the 2019-2020 Household Income and Expenditure Survey to include “unverified data” on household poverty levels in Fiji based on ethnicity and religion.

AS the sparkle from the gold win in Tokyo slowly diminishes, there are more pressing issues on hand as rugby and life moves on in this fast and ever changing world. Do you know that the World Sevens Series is underway in Canada this weekend? Don’t worry, Fijian 7s is not in North America.

BECAUSE of time and space limitations, we are going to advance a few well-grounded assumptions in this article. The first is that our Attorney-General and Minister of Economy does not know everything there is to know under the Sun.

IN my household the 1970s BBC comedy Fawlty Towers is on regular repeat for family entertainment. Only two years ago it was authoritatively ranked as the greatest British sitcom ever. Starring the six-foot-five manic comedian John Cleese, it depicts life in a chaotic English seaside hotel. Its owner, Basil Fawlty is a man who thinks he is always right.

NOT often do Fijians see an heir apparent cut cane in a sugarcane field in Fiji and if it did happen it would be a sight to behold. Lucky for a few Labasa folks, this was something they witnessed on a gloomy Tuesday back in October 13, 1970.

IN medicine, there is a hypothetical instrument known as the retrospectoscope. Actually, it is a colloquialism for looking at a situation after the fact it has happened when almost anyone can be deemed an expert as it is easy to predict an outcome because the outcome has already happened. This instrument is certainly not unique to medicine.

THE year 2000 marked the beginning of a new millennium. It also left rugby fans with tons of memories from the sevens field. The rivalry between Fiji and New Zealand, which has sparked since Hong Kong, continued on the International Rugby Board Sevens circuit which took a new dimension in 1999 with ten tournaments introduced to further promote sevens.

By ILAITIA B. TUISAWAU

EARLIER this week three American former NSA and US military cybersecurity experts were indicted for violations of US laws involving computer fraud and improper exporting of technology. They agreed to a deferred prosecution agreement in which they would pay a fine over three years of a total of $US1.68 million (F$3.50m), support FBI and Justice Department investigations, sever ties to any United Arab Emirates (UAE) intelligence and law enforcement agencies, immediately relinquish their security clearances from the US and any foreign entity and be under a lifetime ban on future security clearances from the US.

BULA readers! I pray your Saturday is going well. This week I received a message from a dear old friend of mine called Joey, who lives in Texas and was connected very closely to a fascinating, fast living and colorful, super star boxer called Tommy Morrison. Tommy was born in January 1969 in Arkansas and was special from the time he could walk. 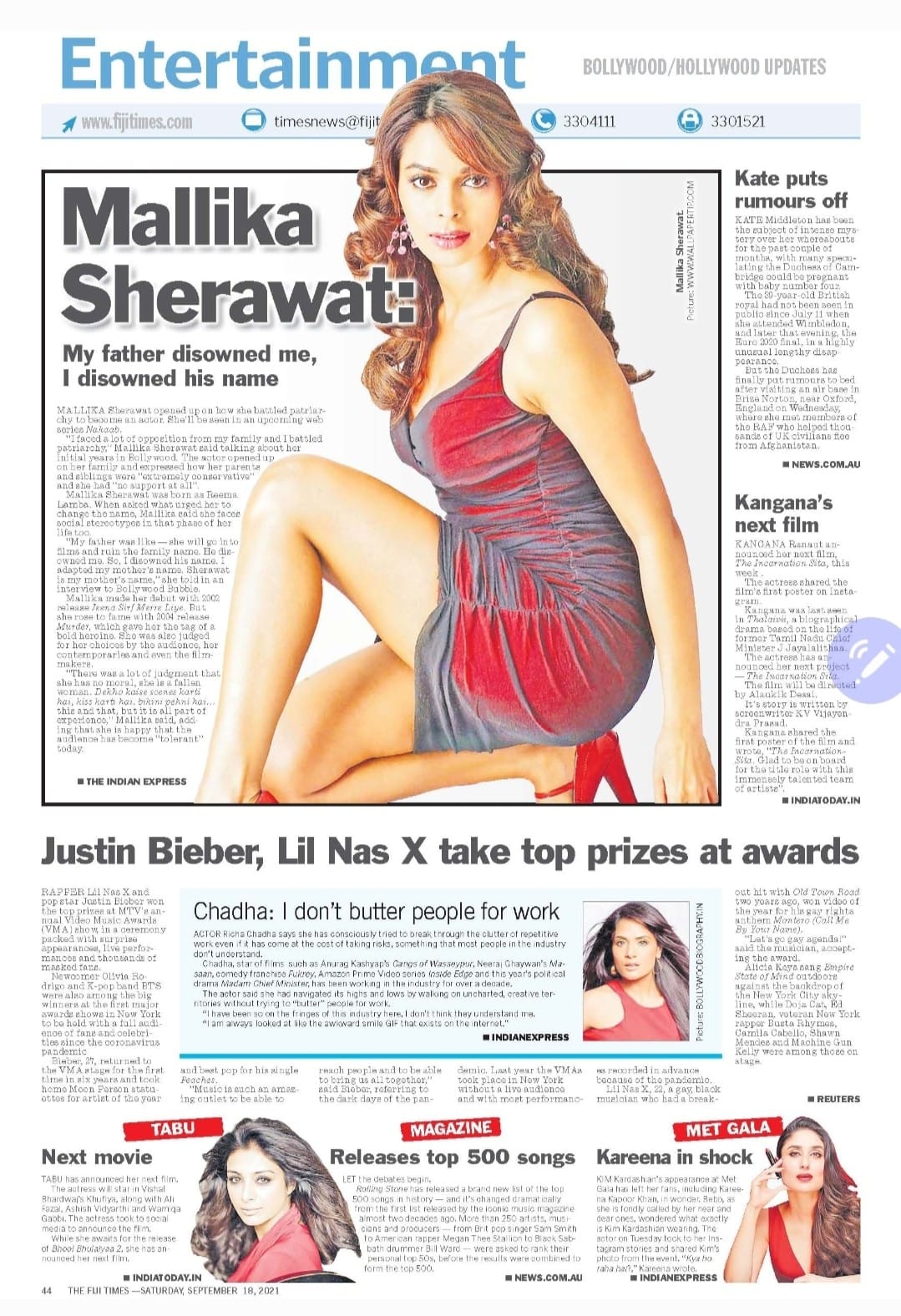 We have pages of entertainment news for your reading pleasure over the weekend. Check it out! 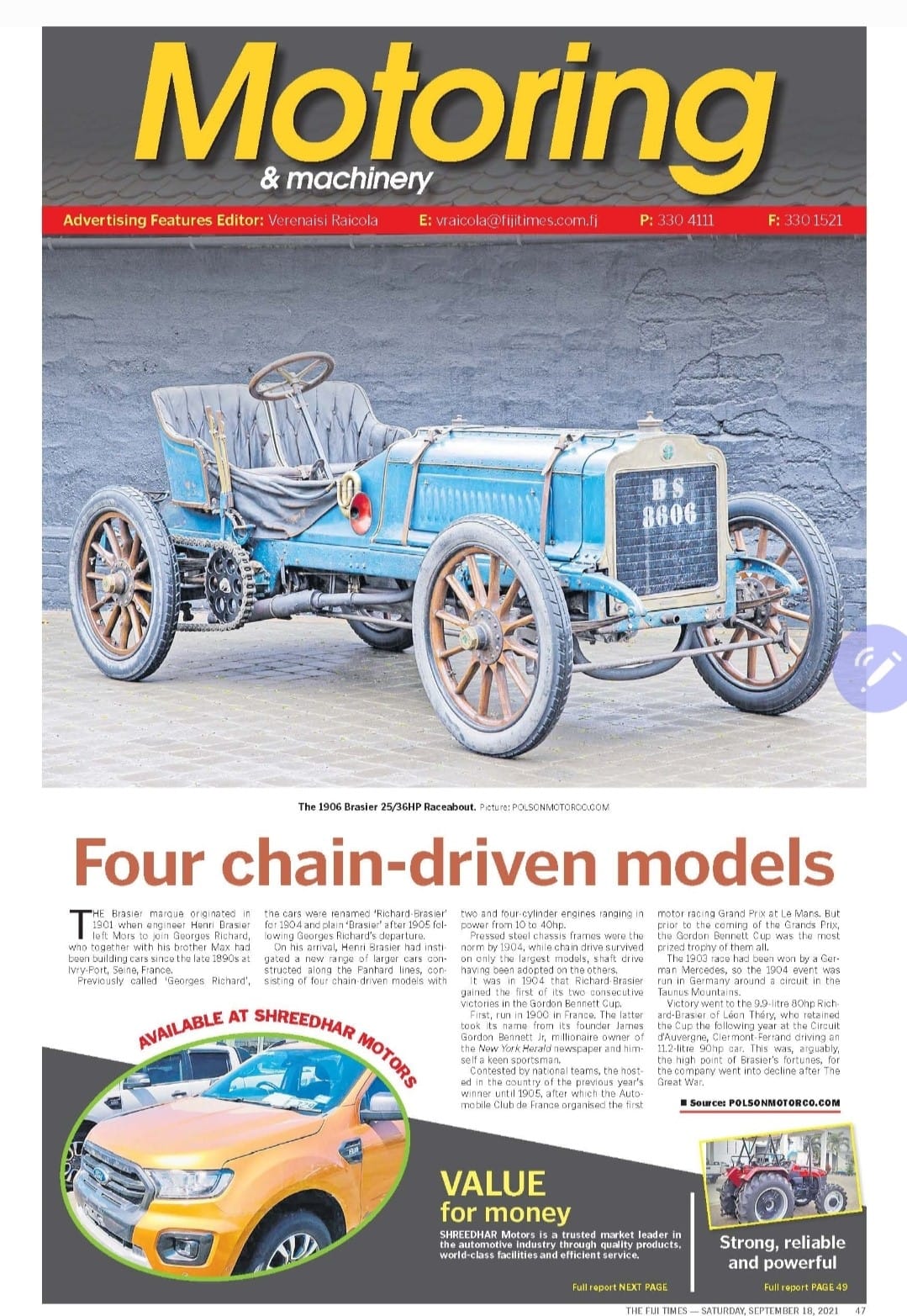 This section is much more than just about vehicles… check it out! 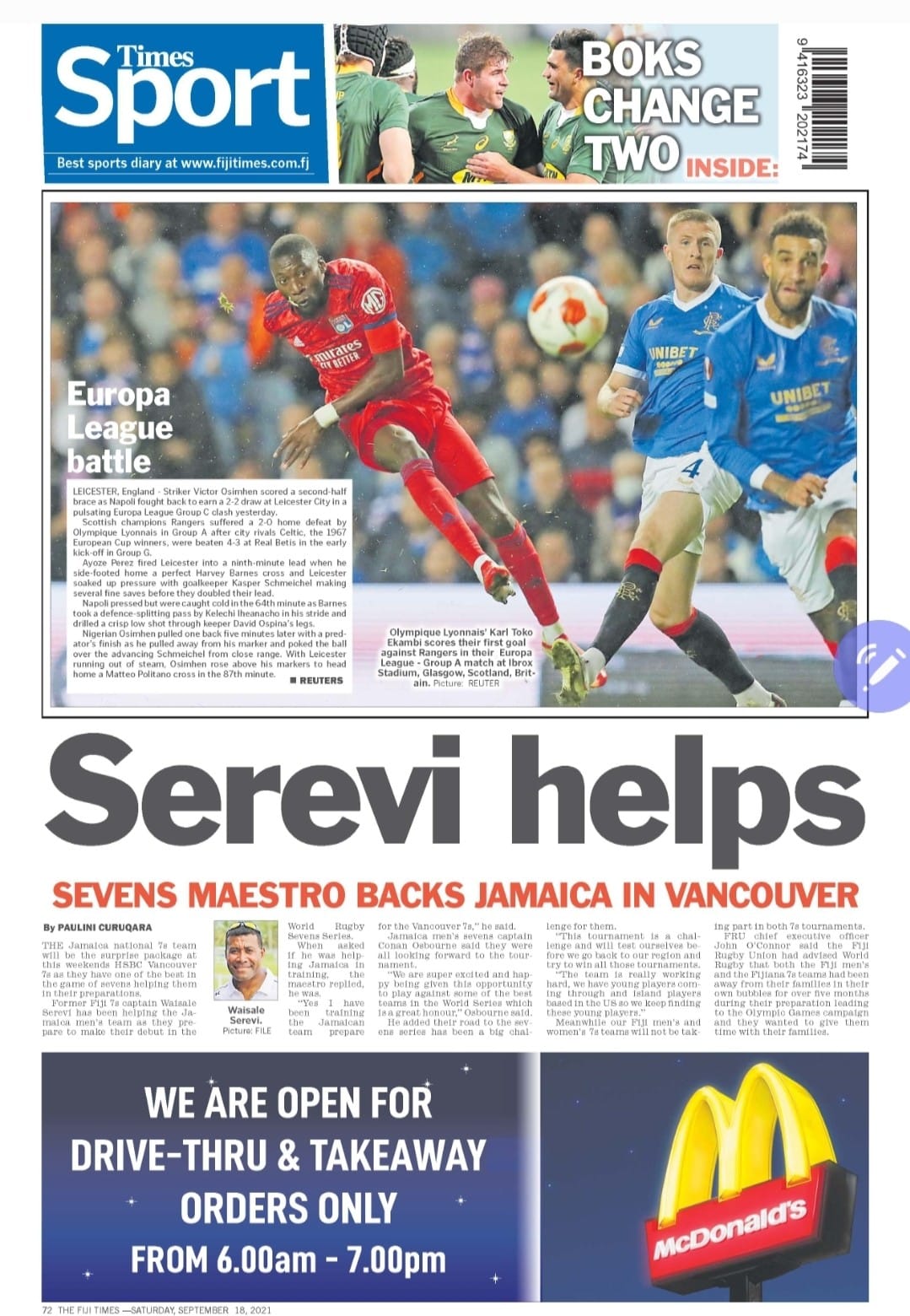 The big one on the back page is about: THE Jamaica national 7s team will be the surprise package at this weekends HSBC Vancouver 7s as they have one of the best in the game of sevens helping them in their preparations. Former Fiji 7s captain Waisale Serevi has been helping the Jamaica men’s team as they prepare to make their debut in the World Rugby Sevens Series.

MORE TO READ INSIDE

There’s more to read inside, but you’ll have to get a copy to know what we are talking about. Happy reading!